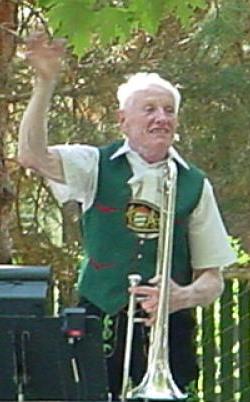 It must have seemed to the other professors at Chico State that Jack was trying to anger them! Jack was the only faculty member who stood steadfastly behind the band in it's early days. Most of the faculty considered us a group of clowns who didn't take their music studies seriously, and who spent as much time playing music for fun as they did practicing their lessons. Jack's attitude was, "What's wrong with having fun while playing music?!"

While the brass choir instructor at Chico, Jack put the band on the program for one of his concerts. It marked the first time (and maybe the last?) that the band performed in a formal concert atmosphere. Jack took a lot of flack from the other faculty members for "legitimizing" this band of rebels, but he stood by us throughout. In fact, when he moved to part time at the University, he joined the group! (That must have really ticked them off!)

Jack succumbed to a debilitating illness some years ago, but he will always be remembered as playing a key role in helping the members of the Chico Bavarian Band establish themselves, not as just "beer swilling musical hacks", but as serious -- and talented -- musicians. (Well, OK, "beer swilling" might somewhat apply...)